This year’s Royal Rush 2 Poker Run will mark the anniversary of our first bike race EVER, and we are more than pumped!

Click on the picture to check out the event presented by Denver Chain Chase – thanks to them for letting us borrow this pic from the event as well!

If you’re looking for a fun race with a chance to meet some great people, this is definitely your race. It’s a great introduction into the world of bike racing, and you’re guaranteed to have a blast while doing it. Last year’s event was incredible- can’t wait for this Saturday!

Flashback to last year’s Royal Rush Poker Run. Click on the pic to read all about it! Photo Credit: DenverSpeak Archive, June 2013. 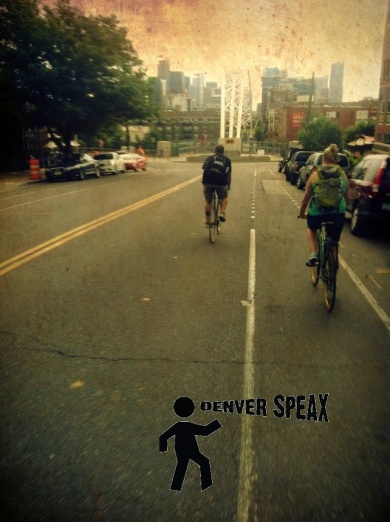 Saturday, July 13th, I embarked on my first bike race with two of our good friends, Michael and Jeff (their first races as well!). Like previously noted, Jeff just moved here from Dallas – he bought a bike roughly a week prior, and had ridden a few times, however we calculated the Poker Rush race to be about 20 miles. Jeff and I being the newbies to biking said, “Why the hell not?” We had 4 hours to finish the race, we didn’t mind if we were last, and we could meet some new people.

We started off at Coco Bikes on Inca in Denver; this is where we registered for $20 (which included sweet tshirt), received the manifest, and hung out until race time. There were roughly 60 people entered in the race – some beginners, like Jeff and I, some serious racers, and some participating to have a chill, bike ride day with friends. All were welcome, which made the race less intimidating. 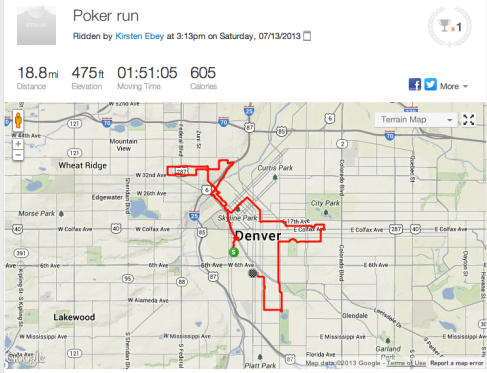 Poker Run – Royal Rush Bike Route. I did not include the bike ride to the starting point, Coco Bikes, from our apartment which is another 4 miles. Our ride home from Broadway clocked another 6 miles. Thanks to the Strava App for allowing me to keep track of these things!

When we were signaled to begin, Michael, Jeff, and I road to the Highlands, the hardest part of the entire race. This is where I hurled in front of children along the sidewalk of a beautiful neighborhood. I had only rode in the Highlands once, which was not anything too strenuous as it was only a few blocks. This was totally different. With some coaching and support from my friends  Jeff and Michael, we made it to our first check point. The rest of the race was around the greater downtown Denver area, including Washington Park, Odelay Tacos, & Denver Bike Cafe.

Four checkpoints, one thunderstorm, and roughly 28 miles later (including bike ride from house, race, and bike ride home), we had finished our first race. We weren’t first, last, fastest, slowest – somewhere in the middle was where we wound up. The experience was incredible, and we met amazing friends.

So, why am I writing about this? Simple: to encourage newbies to not be afraid of such events. It’s an incredible, accomplished feeling to finish a bike race, aside from it being a hell of a lot of fun.

Check out places like CocoBikes, the SKBC Facebook Page, Denver Chain Chase, and other Facebook pages to see what races are coming up in your area! Don’t be afraid – if a bunch of fresh-to-the-city Michiganders can do it, you’ve totally got this!

Big thanks to Denver Bike Cafe & Odelay Tacos for participating as check points in this awesome Poker Run event.