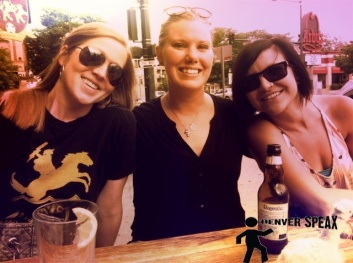 Having a brew at Three Lions before catching the bus to the game. Click on this photo to be taken to the Three Lions Official Website! Pictured: (left to right) Shawna Jones, Kirsten Ebey, and Kat Wood. Credit: Steven Mercer, July 2013

For the 4th of July, our good friend Mitchell urged us to see a Colorado Rapids MLS game – it would totally be the way to go to celebrate the holiday. Being a fan of sports in general, we said, “Hey, why not?!” Last Thursday, we watched the Colorado Rapids take on the New York Red Bulls at Dick Sporting Goods Park. Afterwards, we were treated to the sounds of Denver native emcees, Flobots, and a spectacular fireworks show outside of the stadium – all of which included in the price of our game tickets. Obviously, Mitchell had it right – definitely the best way to celebrate the holiday with friends.

The 6 of us who went bought tickets online not only for the game (roughly $30 including fees & tax), but also a bus ride ($10) to, and from, the game (drinking and driving isn’t cool – be responsible). We bought our game tickets through The Rapids website, or Ticketing Central, or TicketFly (there are numerous places to purchase – pick one!). As for the bus ride to and from the game, we purchased these through Centennial 38 (C38). When purchasing the game tickets, just remember which credit card you used online to pay with them, and they will scan that same card at the entrance in order to print your tickets for you. Regarding the bus tickets, make sure you print out a copy to bring with you – this is your bus pass.

Now, let’s talk about the bus ride, because this is an experience all in itself. We all decided to ride our bikes from our apartment complex to Three Lions on Colfax, and catch the bus ride from there to the game at 7 pm. Of course, we stopped to get a drink before bus time, and were ready to rock at 7 pm. When boarding the bus, you are welcomed with friendly faces, and beer – how awesome is that? Sheets with chants are on nearly every seat, and shouted sporadically on the way to and from the game. The organizers are not only passionate about the Rapids, but also about the fans having a great experience with Denver’s beloved soccer team. There’s absolutely no reason why you should not purchase a bus pass if going to the game – parking at Dick’s can be a shit show, as you will wait nearly an hour to leave depending on where you end up getting a parking spot. Better not to worry about it, or your alcohol intake vs. driving abilities, and just hop on the bus with your friends! 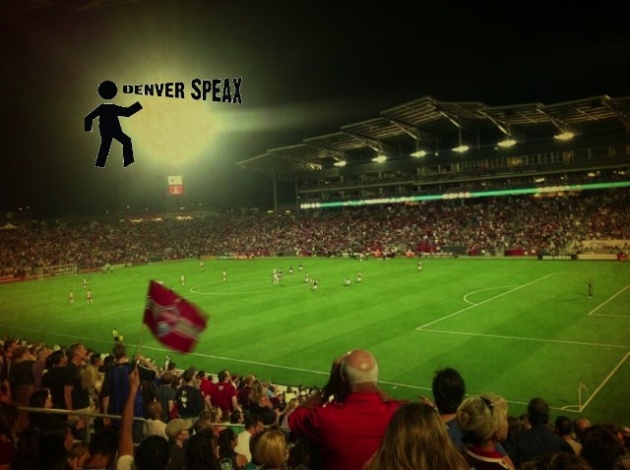 Colorado Rapids fans cheering their favorite soccer team on through the end of the game. Credit: Kirsten Ebey, July 2013 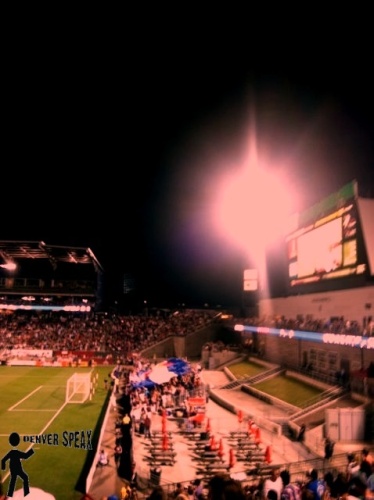 Shot from the south bleachers after scoring the 2nd goal of the night. Credit: Kirsten Ebey, July 2013

Once we arrived, the stadium was packed with people of all ages, including families and friends interested in ringing in America’s independence together. Plenty of Concession stands are available with the coolest staff, only caring about your experience and getting your concessions to you quickly; they serve everything from beer-itas, to hot dogs, to healthy chicken sandwiches, to pizza. Expect stadium prices, but cash and credit are both accepted.

There wasn’t a moment that the 6 of us, as well as the other thousands of fans, were not invested in this intense, fast-paced game – each of us kept the pride alive while cheering for the Colorado Rapids. There wasn’t a time when spurts of rejoice, booing, or clapping couldn’t be heard, making it evident that Denver truly cares about their talented, and hard-working team. The support lasted the entirety of the game. Maybe not as important, but I was also impressed when “the wave” made a consecutive 8-lap appearance around the stadium. What a blast – it’s so cool to be a part of a soccer community that is so positive, inclusive, and awesome. The Rapids played an amazing game, defeating the New York Red Bulls 2 to 0 – way to go, guys!

I can’t wait to go back; better get a jersey, or a “kit”, first just to ensure that everyone knows who I’m rooting for. As I heard multiple times before, during, and after the game, “I BLEED BURGUNDY!” DenverSpeax has totally jumped on that band wagon.

New logo thanks to the beautiful and talented Kat Wood!

Hope everyone had a safe and happy time today with family and friends. Thanks to our troops; we definitely appreciate your hard work and sacrifice.

Thanks to Kat Wood for developing our new logo! Can’t wait to start production on some merch handouts. 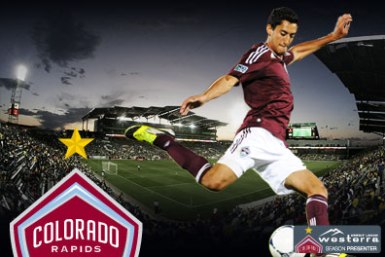 Credit: Ticket Horse & the Colorado Rapids. Click on the picture to purchase tickets for the game on the 4th!

Yes, ladies and gentleman – we are only days away from celebrating ‘Merica right here in Denver, CO, and I, for one, can’t wait. Basically, the entire DenverSpeax crew is catching a 7 pm shuttle from The Three Lions Football Pub on Colfax to Dick’s Sporting Goods Park to watch the Colorado Rapids take on the New York Red Bulls. Tickets were about $25 bucks (plus convenience fee) for bleachers, and the bus ride to, and from, Three Lions is $10 per person. There’s also fireworks. What would a 4th of July be without fireworks, really? Not awesome – that’s what. Come join us for an awesome game of football / soccer, and wish America one kick ass birthday. Hope to see you there!